Chelsea parted ways with its UEFA Champions League winning manager Thomas Tuchel on Wednesday shocking just about everybody. A slow start to the season coupled with a disastrous loss to Croatian club Dinamo Zagreb in the Champions League opener was enough for Tuchel to get the axe.

The decision from Chelsea and its American owner Todd Boehly to part ways with Tuchel was surprising to say the least. The club spent roughly $310 million on players during the summer transfer window that the German manager specifically wanted for this season’s plans. Now a new boss will have to inherit Tuchel’s players.

Chelsea’s 2022-23 season was only 33 days young when the London club made the managerial decision. Brighton’s Graham Potter looks the most likely to be next in line for the Chelsea manager throne.

The internet made its opinion heard loud and clear — as if the internet has ever not felt the need to share an opinion — the Tuchel sacking reaction was not approved.

Why would you sack the manager after 2 games the window closed and backing him in the entire transfer window?

£250m and you sack him a week after the transfer window? Whether you thought he should be on thin ice or not. What is that all about? Something has gone off behind the scenes that’s the only way I can see why. But even then.

Since the news broke this morning about Thomas Tuchel sacking, I’m struggling to find anyone on social media that has agreed with it, everyone including supporters of other clubs cannot believe why Tuchel has lost his job.

Tuchel stuck with this club during its toughest time. The club didn’t stick with him during his.

Us fans will always love you Tommy T. Thank you for everything..

Tuchel was reportedly left “totally shocked” after he was sacked on a brutal 10-minute phone call in which he pleaded to be given a second chance. (@MirrorFootball) #CFC

Thank you for everything, Thomas. You deserved more time. pic.twitter.com/oaOYJZHv5f

An elaborate fake tweet posing as Christian Pulisic was created in response to the Tuchel sacking, and I almost fell for it. 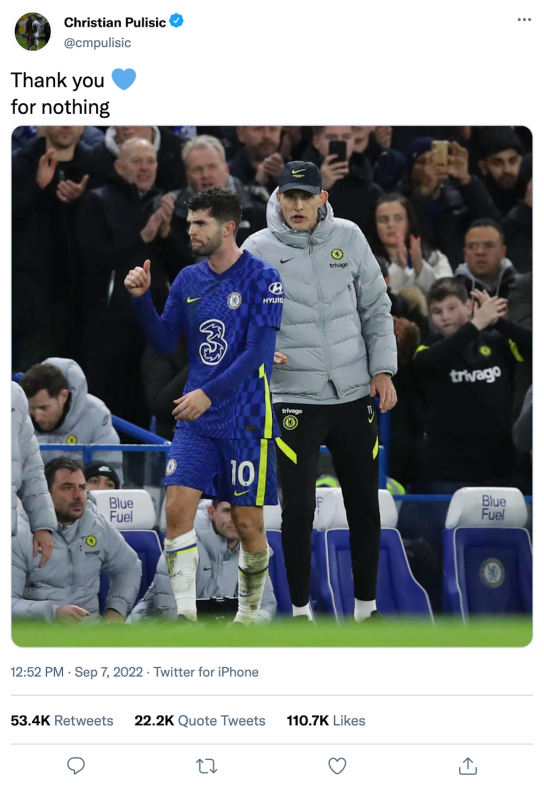 Most Pulisic and USMNT fans couldn’t be more pleased with the news of Tuchel’s departure. The American star was severely limited in playing time to begin the 2022-23 season and now could have a chance to regain a starting role with the club. There is also a possibility Chelsea’s new manager hates Pulisic and never plays him.

Ladies and gentlemen, we got him. pic.twitter.com/iMmBogAFOK

Congratulations to Pulisic on orchestrating Tuchel ouster in it’s entirety