A Brief History of the Organic Movement 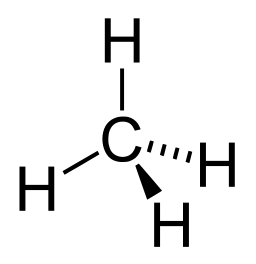 When used by a chemist, organic refers to chemical compounds with carbon-carbon or carbon-hydrogen bonds. One of the simplest organic compounds is methane, consisting of one carbon bound to 4 hydrogen atoms. On the other hand, a biologist would use the word to describe something derived from or having properties of living organisms: “Fish, fowl, and amphibians are organic life forms in a wetland environment.”

Organic took on an additional meaning in 1940 when a noble, Lord Northbourne, coined the phrase “organic farming.” Due to the industrialization of agriculture in the early 1900s, a small group of farmers in Europe, Australia, and United States began to take issue with synthetic fertilizers and pesticides. They formed associations such as Demeter International in Germany, a group that encouraged “biodynamic farming,” a holistic approach to agriculture overlaid with mystical and spiritual components.  In 1972, several like-minded organizations combined to form the International Federation of Organic Agriculture Movements (IFOAM). 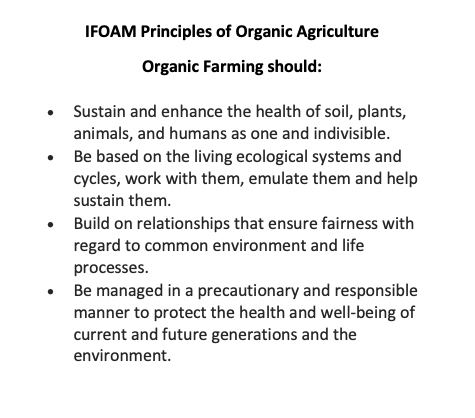 The stated mission of IFOAM was the “worldwide adoption of ecologically, socially and economically sound systems, based on the “principles of organic agriculture.” Today, common usage of organic has been further extended to mean “healthful” or “close to nature.” It is also widely believed that organic describes foods grown without artificial pesticides or fertilizers. However, under U.S. NOP guidelines, this is not always true as several synthetic materials are available for use as pesticides under particular circumstances.

While IFOAM’s principles are over-arching, lofty, and conceptual, the U.S. NOP standards are specific, pragmatic, and down-to-earth. Unlike IFOAM, NOP makes no claims for human health. There are no spiritual pluses, mystical connections to the earth, or mentions of fairness or equity to workers in the NOP standards. It is a marketing program, pure and simple.

American agriculture was in crisis during the 1980s, with thousands of farmers facing bankruptcy. The organic category was created to provide new markets for farmers and producers, especially where traditional crops such as tobacco, soy, and wheat lost subsidies and faced eroding markets. AMS understood the demands of the modern consumer and pivoted to give them what they wanted:  AN ORGANIC LABEL.

“Organic is a labeling term that indicates that the food or other agricultural product has been produced through approved methods. The organic standards describe the specific requirements that a USDA-accredited certifying agent must verify before products can be labeled USDA organic”.

A group of advisors meets twice annually to determine what is and isn’t organic. The NOP website then lists the standards for crops, livestock, poultry, and handling of different ingredients. 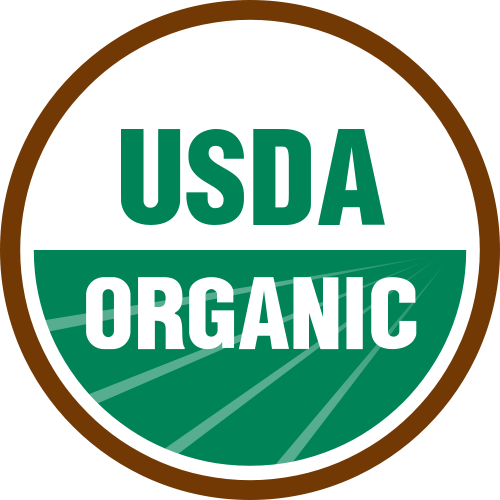 A Tough Row to Hoe

Obtaining a USDA Organic Certification is time-consuming and expensive for agricultural producers. Some specific requirements seem arbitrary, based more on speculation than science.  Some approved organic methods are still in the discovery phase, so we’ll have to wait and see if they are more sustainable than chemical pesticides or GMOs. There is constant flux in the program standards depending on who serves on the NOP advisory board.

Dairy farmers have a mandated one-year transition period to move their cows into organic production. Farmers who grow crops must wait three years and document that the land has not used prohibited substances such as certain pesticides or fertilizers during that period. This puts great hardship on farmers who wish to transition but have reduced or no income until they become certified.

Some standards are difficult, if not impossible, to achieve. For example, livestock producers must feed their animals ingredients that are 100 percent organic – no GMOs. In 2006, 61% of corn and 89% of soybeans planted in the U.S. were GMOs. If livestock producers DO find a non-GMO feed source, they pay through the nose to purchase it.

Additionally, farmers must prevent the co-mingling of organic with non-organic products; most organic certifiers have a limit of between 0.1 and 0.9% upward level of cross-contamination by GMO ingredients. This means farmers must find equipment for storage, handling, and transportation that are separate and dedicated to organic-only products. This adds expense not only to farmers but up and down the supply chain, and ultimately you, the consumer.

If You Didn’t Write It Down, It Didn’t Happen.

Did I mention paperwork?  The U.S. government administers NOP, so many forms are required for documentation. Here is a comment from one organic producer in 2019 on a USDA posting on organic certification:

“I have never seen so much arbitrary nonsense in my life as getting organic certification. Filling out page after page of paperwork on how to follow some arbitrary rules creates no value and wastes an enormous amount of time, us farmers could be using to actually making organic food.”

Another farmer claimed forms required 89 hours for him to complete. According to the USDA’s Sound and Sensible Initiative, the NOP will make available 75 factsheets, 16 training presentations, and 15 videos to explain the certification process and standards compliance. Why so many? It’s complicated. Here is the Code of Federal Regulations for Allowed and Prohibited Substances in Organic Farming and the record-keeping guidelines for pesticide use.

Increasingly more and more farmers are willing to jump through burdensome hoops, inspections, and certifications to obtain a premium price for their specialty crops, milk, and meats. Organic foods get a 30 to 60% price boost over traditionally-farmed foods. Given the increased regulatory burden, we should expect that organic foods should cost more. But do we want our farmers to fill out forms, follow untested methods, spend more on equipment, or …..work as stewards of the land?

Image of methane in the Public Domain on Wikipedia

FDA Organic Seal in the Public Domain on Wikipedia